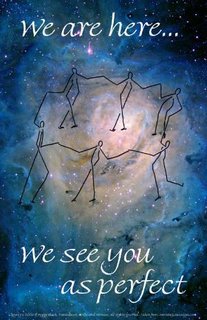 The subject line on the email was: "Morning messages for multidimensional star humans." I was tempted to pass it over, feeling it simply wasn’t for me. For one thing, I don’t consider myself to be particularly multidimensional, although on some days I feel I am suffering from multiple dementias. Furthermore, I’m not a star, and I emphatically am not a morning person. But the body of the message had a pretty picture, and I’m a sucker for pretty pictures. So I read on.

And that’s how I learned about Peggy Black and her Stick People.

It all started one day over thirty years ago, when Peggy was teaching a class in visual poise, which is the art of standing, walking, sitting, pivoting, mincing, and slouching properly. It dawned on her that most folks, being either right-handed or left-handed, are not very skillful at using the non-dominant side of their bodies. How much more visually poised could her students be if she were to help them develop that non-dominant side? Accordingly, she decided to lead the class in an exercise using their non-dominant hands for mundane tasks. She herself began practicing drawing with her left hand, and to her amazement, images began to appear on the page.

They were Stick People.

"They danced on the page," Peggy wrote. "They flew, they gathered, they grouped. They became my friends and my passion. I allowed my left hand to totally express these delightful images, filling volumes of art books."

These Stick People seemed to take on a life of their own. Fortunately, they were benign, and as it happened, they were from another dimension. If you guessed the second dimension, however, you’d be wrong; they came from a much more advanced plane than that.

Over the years Peggy continued to draw her Stick People, and along the way she explored many aspects of healing, spirituality and personal growth. One morning while journaling – which is a mandatory activity for those who are personally growing – she wrote, on a whim, the word, "Contact." To her surprise an answer came: "We Are Here."

It was the Stick People.

"It was like a dialogue," Peggy wrote. "I would write a question and receive a stunning answer in my head." This is much the same thing that happened to Neale Donald Walsch, the difference being that his dialogues were with God, and he's made about a bazillion dollars on his creative writing exercise. I don't think Peggy has yet realized that level of income, but her AM dialogue with the Stick Folk was the first of many more to come. Peggy now refers to these chats as her Morning Messages, because that’s when they come to her. And now she wants to share them with us.

Peggy’s credentials are impressive, in a multidimensional sort of way. She is a self-described Sacred Sound Salutartist, Spiritual Synergist, Transducer and Scribe who "weaves her intuitive gifts, expertise, skills, and multiple talents assisting others to live an empowered, rich and abundant life." According to her web site, she is also a Focus Manager, an Intuitive Counselor, a Conscious Communication and Language Coach, and a Master Space Organizer. In addition, she is a lecturer and workshop facilitator. And as if that weren’t enough, she is a minister of the Universal Life Church (the same Church with which I am affiliated) and a high priestess. Peggy creates and conducts soulful rituals using "the power of sound and the holiness of water." (Hmmm, there’s that water theme again.) Peggy is also the Seneschal for the Labyrinth in the Garden of the Beloved, but I have no idea what all of that means, and I don’t have time to look it up. Google it for me, will you?

Some of the sacred sites where Peggy has conducted her holy ceremonies include Arabia, England, Ireland, Egypt, Japan and St. Lucia. She also gives international lectures and workshops about topics such as The Metaphysics of Sales; Miracles, Intentions and Manifestations; Allowing Prosperity; Sound Awareness; Sculpting Reality with Sound; The Power of Your Words and Intentions; The Creative You; and Alchemy of Collage.

But the current focus of her work seems to be on the messages from the Stick People. And they, apparently, have a lot to tell us, and most of it is really quite flattering. Oh, I know what you're probably thinking: they are just trying to blow smoke up our arses so we'll buy their books and CD sets and seminars. But you have to admit their words are nice. Hey, they see us as perfect, so I'm not complaining.

If you ask me, Peggy is extremely fortunate that her non-dominant hand exercises yielded such apparently benign results. She's lucky that her southpaw scribbling revealed nothing more than a tribe of sycophantic twigs. Fact is, non-dominance exercises can be very dangerous, even trauma-inducing, as reported in an insightful article by investigative journalist Kanna Wermz*.

So I’d stay away from the non-dominant hand exercises if I were you, and just stick (ahem) with Peggy and her Morning Messages. If you want to learn more about getting in touch with your own multidimensional Self, and/or if you want to hear Peggy tell her story in her own words, click here with your dominant hand. Or, if you're really brave and are prepared to face the potential consequences, use your non-dominant hand, or your foot.

Now let me tell you what is really spooky about this whole thing. Moments after I received my email about the Stick People, I saw, crawling along the ledge outside my office window, a stick insect. I will let you know if it conveys any messages to me.

* aka Cosmic Connie, in the 1996 magnum dopus Cosmic Relief. Sorry...more recycled material. But then, recycling is a good thing, isn't it?