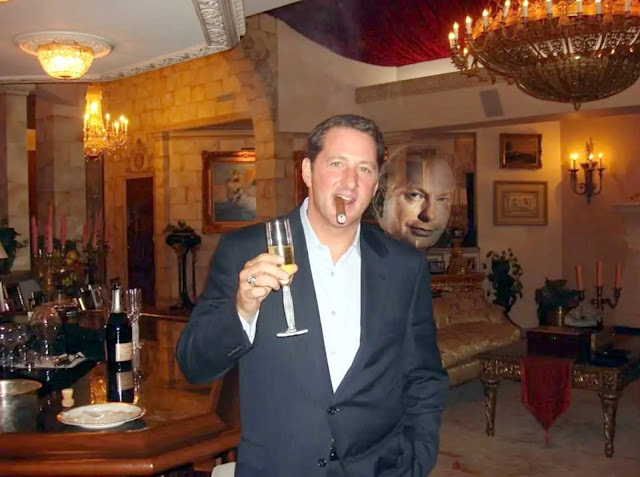 March has been yet another month in which I mostly neglected my Whirled. Life sometimes gets in the way of hobby-blogging. I've had several items on the back burner for months, but let's start with a topic that's probably predictable if you're at all familiar with this blog: serial scammer Kevin Trudeau, who has been serving a ten-year(ish) federal prison sentence for criminal contempt related to hugely deceptive infomercials for a weight-loss book he perpetrated years ago.

Trudeau served most of his time in a minimum-security Federal sleepaway camp (FPC Montgomery, Alabama), but since January of 2021 he has been in home confinement in a private residence in the Chicago area, where, if he's a good boy, he'll be allowed to finish serving out his sentence. His scheduled release date is either May 2022 or July 2022, depending upon the source to which you're referring.

Now, just what he's going to be able to do once he's totally "free" is still open to question. I wrote about that in January of 2020.

More recently, Trudeau has captured the attention of one of my favorite writers, Tony Ortega, author of the Underground Bunker blog as well as a couple of engrossing books, all of which take a relentless look at the evil cult-religion Scientology. In January of this year, Ortega published a blog post about the similarity between Kevin Trudeau's sales pitches and those of Scientology as Trudeau's release from prison draws nearer.

Trudeau can hardly wait to get back in the saddle, and his Global Information Network (GIN) is anticipating his release by starting to book personal sessions with him after he gets out. Yes, if you book early, you can secure in-person counseling with a man who never lets government fines and prison sentences from selling himself as the best life coach you could ever want.

Thanks to a reader, it’s been brought to our attention how much his GIN program is looking more and more like Scientology. In fact, we think you’re really going to be struck by the vocabulary Trudeau uses as he offers a new “level” of counseling he’s calling “Director VIII.”

Actually, this stuff has been going on for a long time, and while the extent of Trudeau's involvement in Scientology may not be widely known, his long-time affinity for Scientology is well-known among those who have been obsessively following him. Moreover, while the essence of the Underground Bunker post is accurate -- particularly the point that Trudeau/GIN use Scientology-ish language -- Ortega's take on the "in-person counseling" and the "new level of counseling" is a little misleading. What is actually being promoted is a new level of GIN membership -- Level 8 (or VIII, if you prefer) -- with the initial training session to be delivered in person by Kevin himself on some date (still to be determined) after he has completed his prison sentence. (GIN's plan from the beginning was to eventually offer 12 membership levels.)

And it's not just a matter of "booking early" -- in theory, anyway, you have to join GIN, and then you have to work (and pay) your way up through Levels 1-7 by a certain date in order to qualify. I wrote about the "Level 8" training scheme in January 2020.

That said, Ortega was spot-on about the continuing influence of Scientology on Kevin Trudeau. It goes even deeper than influence, though: judging from some of the content that has been posted on Trudeau-approved web sites, Trudeau has aspirations to be a massively influential cult leader much like the late L. Ron Hubbard, founder of Scientology. I wrote about this at length in December 2019; in particular, scroll down to the part about "Kevin's big dream..."

I first wrote about the GIN/Trudeau/Scientology connection in July 2012, focusing on the cult-like indoctrination tactics that were used on GIN members. This was back when GIN's chief revenue generator was the club's scammy multilevel marketing scheme and its progressively pricey membership levels. GIN is still selling progressive levels of membership, but for a lower price, and it's no longer an MLM, although members still get referral/affiliate fees.

The embedded links to the "questionnaires" in my 2012 post are no longer valid, but I did take the liberty back then of copying and pasting some of the questionnaires, which faithful GIN members were supposed to answer on a daily, weekly, and monthly basis. They were taught that by performing all of the items on the lists, they would ensure their business -- that is, their GIN downline -- was a success. Just looking at the lists is enough to make one's head spin; someone would have to be truly OCD (or totally indoctrinated) to actually do all of that stuff. And it would leave very little time left over for an actual life.

But then, that's the whole idea: dedicate your life to the Master, and if not your life, then at least all of your money, including money you don't actually have.

Granted, Trudeau has been pretty quiet since he's been in the home-release program, and his proxies haven't exactly been churning out tons of Kevin-dictated/approved posts on his main Facebook fan page lately, as they did in the recent past. Some of his defenders have speculated that, congruent with claims Kevin himself has made in courtrooms and on social media over the years, he really has emerged from his prison ordeal a changed and humbled man who is sincerely interested in helping others and making the world a better place.

But I'm not buying it. I seriously doubt that Trudeau's silence stems from humility, though I'd be willing to bet that it's motivated at least in part by a desire to convince certain judges that there's nothing to see here: that Kevin Trudeau is no longer even remotely interested in being a huckster and cult leader. If the judges are smart, they won't buy that.

PS ~ Here's my take on the excellent Business Insider piece, from January 2015, that Tony Ortega cited in his blog post.

* * * * *
July 27, 2021 marks the 15th birthday of Whirled Musings!
If you're so inclined, why not help celebrate WM's Quinceañera?
Now more than ever, your gift is needed
to help keep this Whirled spinning.
Click here to donate via PayPal or debit/credit card.
If that link doesn't work, send PayPal payment directly to
scrivener66@hotmail.com
or to cosmic.connie@juno.com
If PayPal, be sure to specify that your contribution is a gift. Thank you!
Posted by Cosmic Connie at 5:14 PM 2 comments: