Randazzled: hail the free-screech superhero of [alleged] rapists and Nazis and trolls 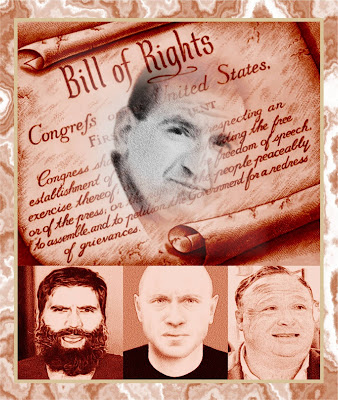 You may be familiar with Marc Randazza, free-speech attorney and former hero of Jason Jones' Salty Droid blog. In this February 2016 post, I wrote about Randazza and his defense of prick-up "artist" and accused rapist Daryush Valizadeh, more commonly known as Roosh Vorek or Roosh V or simply Roosh (or Doosh, on this blog). It's a long post, but to get to the Randazza/Doosh part, scroll down to the sub-head, "There's Doosh. I mean, Roosh..." In my post I go to great lengths to acknowledge that everyone has the right to freedom of speech and that even someone who has been accused of sexual crimes deserves a good defense, and that, furthermore, wrongfully accusing someone of sexual assault (had that been what was going on) is a very bad thing. But I also acknowledged that there seemed to be an abundance of evidence that Roosh really is a Doosh, and that it appeared that Randazza was unfairly going after a blogger who simply wrote about the rape accusations against his client, and that... well, you can follow the link and read it yourself. Point is, I did try to be more than fair to the less than savory.

I'd initially heard of Randazza because, as indicated above, he was an apparent friend and champion of Jason Jones, whose muckraking Salty Droid blog has, since its inception, been a frequent target of legal action, both real and threatened. In fact I thought of Randazza as sort of a free-speech hero, especially given his boasts that he does a lot of pro bono work to defend unpopular speech. Granted, when I got sued by the loathsome fake doctor and cancer fraud Leonard Coldwell, Randazza seemed indifferent to my own plight (as did another noteworthy free-speech attorney who shall remain nameless here but whose name is mud to me), but Randazza was helping my pal Jason, and that was good enough for me.

But, to put it charitably, he turned out not to be the champion of Jason's work that Jason had hoped -- as Jason explained, not so charitably, in this April 2016 blog post.

If you already knew this background stuff, I apologize for the redundancy. In any case, Marc Randazza has been in the news more recently for some of his other stellar clientele who belong in the Squall of Shame along with Doosh. For example, there's the publisher of the Neo-Nazi site Daily Stormer, Andrew Anglin. In spring of 2017 Anglin was sued for coordinating a terror campaign of online harassment against a Jewish real estate agent, Tanya Gersh. Randazza had filed a motion to dismiss the suit based, of course, on his client's First Amendment rights. But last week Dana L. Christensen, chief judge for the U.S. District Court in Missoula, Montana, denied the motion, saying that the real estate agent was a private citizen and that Anglin had incited his followers to harass her as part of a personal campaign.

The civil case (there have been no criminal charges) is now expected to go to trial. From the New York Times article linked to in the above paragraph:

...It has taken a long time because it proved impossible to serve Mr. Anglin with legal papers, Mr. Dinielli said. Mr. Anglin’s last known address was in Ohio, but his whereabouts have been unknown for nearly two years. He is still running the site, possibly from overseas.

“The rule we lay down for the Nazi applies equally to the civil rights activist,” Mr. Randazza said in a statement. “And that ruling, if it stands, is not going to be good for anyone who engages in common outrage culture. Maybe that’s a good thing, but I think not.”

Well, Mr. Randazza, notwithstanding your histrionics, in light of the fact that Ms. Gersh has faced truly frightening harassment and death threats as a result of Anglin's blatant incitement, I would say that defending this form of "free speech" is not a good thing. From the "Background" section in Judge Christenson's November 14 order:

The messages received by Gersh and her family, including her son, were filled with ethnic slurs and misogynistic rants. Many messages referenced the Holocaust, and some threatened violence. When Gersh filed her Complaint in the spring of 2017, she and her family had received more than 700 disparaging and/or threatening messages over phone calls, voicemails, text messages, emails, letters, social media comments, and Christmas cards.

In case you missed it, which I apparently did back in July of this year, Randazza also chose to defend conspiracy-porn peddler Alex Jones in some but not all of the numerous legal actions that families of the Sandy Hook victims have filed against Jones. Randazza is involved in a couple of cases in Connecticut. From the July 2, 2018 New York Times article linked to in the previous sentence:

Mr. Randazza has appeared on Mr. Jones’s radio show and in InfoWars videos. In a brief telephone interview, he acknowledged opinions by First Amendment lawyers not involved in the cases that the Sandy Hook families have a strong claim against Mr. Jones. “I think if you look at the allegations in the complaint, that’s an easy conclusion to make,” Mr. Randazza said. “But as these cases progress sometimes things turn in the other direction.”

“We are going to be mounting a strong First Amendment defense and look forward to this being resolved in a civil and collegial manner,” he said, asserting that Mr. Jones has “a great deal of compassion for these parents.”

Randazza, not surprisingly, has vigorously defended his choice to represent Alex Jones as well as the Neo-Nazi Anglin, even as he vigorously defended his choice to represent RooshV back in 2016. In an interview with the Connecticut Law Tribune in July, as reported on the Law.com site, Randazza said that when choosing clients he has no social litmus test or political litmus test; the First Amendment is his only litmus test. He 'splained that he has also represented left-leaning clients -- even some who are Muslims, for goodness sake! -- and that he leans leftward himself. He also says he took pains to make sure that representing the Neo-Nazi guy, Anglin, was okay with his Jewish partner, Jay Wolman.

But others have taken issue with his claim about being a First Amendment purist. F'rinstance, there's Elie Mystal at the Above The Law site. He has considered himself to be an ally if not actually a friend of Randazza, but regarding the Jones representation, even he felt compelled to point out, in this July 3, 2018 post, that Randazza's moral compass appears to be broken.


...you can defend deplorable people without adopting and promoting their deplorable logic. There’s a difference. The legal community does not talk about that difference very much: lawyers shun deplorable lawyers, and deplorable lawyers put their heads so far up their own ass that they think any suggestion of restraint smells bad. But we can draw a line of demarcation around zealous legal defense and ridiculous alt-white dogma.

For me, that line is right here:


“We are going to be mounting a strong First Amendment defense and look forward to this being resolved in a civil and collegial manner,” [Randazza] said, asserting that Mr. Jones has “a great deal of compassion for these parents.”

No, Alex Jones does not have “compassion” for the families of Sandy Hook victims. Saying he does is a lie. Alex Jones has argued that the parents of Sandy Hook victims are FAKING the death of their own children. That means he has no compassion for their suffering. That’s not a difference of opinion, that’s not a certain point of view, that’s a straight lie designed by the alt-right so that the assholes who support Alex Jones can tell themselves that they aren’t going to end up in Hell for their terrible beliefs.

It’s a lie that all lawyers, no matter how steeped they are in Nazi appeasement, have no duty to repeat. If you are going to make your career along the lawyerly duty to give the most disgusting among us a competent legal defense, then stick to the law. If you have a First Amendment argument, MAKE IT, and leave the rehabilitation of Alex Jones’s character to Donald Trump. If you want to argue that Jones’s didn’t have “actual malice” when flinging his wild conspiracies, fine, make that case IN COURT where you can be held to a standard of EVIDENCE for your ridiculous assertions.


If you want to represent detestable clients, fine. But when you go out into the media and don’t just defend them but actually adopt their logic and moral arguments, that’s different. Then, it looks like you agree with them. And if you agree with them, you can no longer avail yourself of the lawyerly presumption that you are just doing your job. Instead of being a mere part of the process, you become part of the problem.

I imagine that Salty Droid has some choice words about Randazza and his choice of clients. I'll leave that to him to address (again) on his own blog, should he choose to do so.

As someone who has had her own speech threatened by ill-intentioned scoundrels, I'm a pretty big fan of free speech. I took some time to explain my views, which are more nuanced than some might imagine, in a post I wrote back in August re Alex Jones' whining about being "censored" by several major social media platforms. Here is that link. Even the vilest and most loathsome folks have a right to have their say. They most certainly have the right to legal representation when sued for civil offenses or charged with crimes. And even the hallowed ACLU has defended Neo-Nazis. But when Nazis and trolls having their say crosses the line to harassment and incitement, the First Amendment doesn't -- or at least shouldn't -- protect them. I'm no highly-paid First Amendment attorney, but even I can figure that one out.


* * * * *
Now more than ever, your donation is needed
to help keep this Whirled spinning.
Click here to donate via PayPal or debit/credit card.
If that link doesn't work, send PayPal payment directly to
scrivener66@hotmail.com
or to cosmic.connie@juno.com
If PayPal, be sure to specify that your contribution is a gift. Thank you!
Posted by Cosmic Connie at 4:50 PM 2 comments: Links to this post