Elite and eliter...Part 1 of 2: The redcaps get a title upgrade 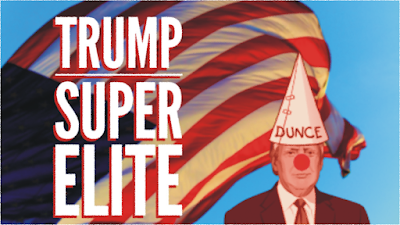 I've been thinking a lot lately about populism versus elitism, and the ways in which the two are sometimes clumsily melded not only by demagogic politicians like Donald Trump but also by some Scamworld gurus.

Populism, of course, is nothing new in America, and in various forms it has been a political tool of both the left and the right, as the writer of this January 2018 piece on History.com observes.

By the 1980s, politicians in both parties routinely declared themselves populists, but they pursued conflicting agendas and identified different enemies. Since the days of FDR, Democrats articulated a message of economic populism, railing against big business, Wall Street and the wealthy for failing to understand the economic plight of average Americans. After the social turmoil of the 1960s, Republicans built a powerful political base using a language of cultural populism, charging that Hollywood producers, intellectuals and liberals were out of touch with the cultural values of mainstream Americans.

Another truth that may be self-evident is that populism is a double-edged sword:


While it has inspired great political-reform movements, it has also been manipulated by demagogues to promote fear, divide the nation and infringe on individual rights.


Indeed. In the past several decades, populism has become an egregiously misused tool of right-wing demagogues in particular, and a significant part of their rhetoric has been centered around their misuse of the word "elite." These demagogues -- mostly composed of the "haves" -- long ago appropriated "elite" as a tool to pander to the "have-nots." It was of course the height of hypocrisy for plutocrats to paint "the elite" as a bunch of privileged left-wing (of course!) intellectual and social snobs who not only looked down on the average American, but were also, in ways never really explained, robbing these average Joes and Josephines of the American Dream. As verifiably wrong as the demagogues' claims were, the ploy was often effective, causing Mr. and Mrs. Average to repeatedly vote against their own interests. They were distracted by tales of mostly imaginary enemies while failing to notice that the robber barons to whom they listened so raptly had their own hands in the till and were destroying what was left of the middle class.

The History.com piece cited above was framed around #NotMyPresident Donald John Trump's populism, and his constant attempts to paint himself as a "man of the people." Absurd as it is to anyone who has actually been paying attention to this boastful, ostentatiously wealthy blowhard since the 1980s, Trump's false self-portrayal as a man of the people has successfully convinced many middle-class Americans that he is truly looking out for them, and that, to name but one example, his 2017 tax cut was a gift to them instead of to big business and the one percent.

It's pretty clear, and unsurprising as well, that Trump hasn't exactly followed the norms of modern populism as described in the passage I quoted above. He is in so many ways the very personification of the vulgarity derided by traditional right-wing populists -- he is crass, boastful, amoral -- and rather than deriding those supposedly obscene "Hollywood values" he actively embraces them. Beginning with the 2016 campaign and continuing into his "presidency," he has eschewed legacy right-wing cultural populism, instead choosing to co-opt the economic populism of the left -- all in order to appeal to the base who felt the American Dream slipping from their fingers. In his jobs-plan speech in June of 2016 he read these scripted remarks:


Globalization has made the financial elite who donate to politicians very wealthy. But it has left millions of our workers with nothing but poverty and heartache...

...I want you to imagine how much better our future can be if we declare independence from the elites who've led us to one financial and foreign policy disaster after another.
Our friends in Britain recently voted to take back control of their economy, politics and borders.
I was on the right side of that issue - with the people - while Hillary, as always, stood with the elites, and both she and president Obama predicted that one wrong.
Now it's time for the American people to take back their future.

Never mind that Trump himself was, for many years, a member of that "financial elite" who donated to politicians on both sides in order to advance his own business interests. In any case, as noted in this June 28, 2018 piece in New York...

At some point, the ruse grew so tiresome to Trump that he began to imagine the words he was reading about his opponent had actually been composed by his opponent. And no wonder. Trump’s public persona has been geared toward manic puffery of his own success. A key element of his grift has involved selling people on the notion that they too can become rich if they buy Trump books or predatory “university” courses.

Lately Trump has dragged the word "elite" to new depths, appearing to employ it simultaneously as the term of abuse it was intended to be by the demagogues who preceded him, and as a compliment to himself and to his hypnotized followers.
This rhetorical trend has not gone unnoticed by the late-night comedians, nor by the New York writer.

The newest complaint President Trump has taken to airing out in his post-campaign rallies is an unearned compliment given to his opponent. “They call them the elite,” he declares, in his new favorite riff. “Why are they elite? I have a much better apartment than they do. I’m smarter than they are. I’m richer than they are.”

It is obviously not Trump’s opponents who call themselves the elite, but Trump himself, or at least the author of his speeches.

But now he is also calling his supporters "elite" (or "super-elite") during his increasingly deranged campaign rallies. At his June 27 rally in Fargo, North Dakota, he boasted that not only is he richer than his enemies, but that his supporters are as well. "We got more money, we got more brains, we got better houses, apartments, we got nicer boats, we're the elite."

As the New York writer observes:


This is not, of course, how populism works. It trades on either cultural or economic grievance. One’s enemies possess all the privilege, and we the people must take it back. Once you have declared that you already possess the privilege, the whole basis for it disintegrates. While Trump performed perfectly well among the rich, most of his supporters are not rich (because most Americans are not rich) and would have trouble recognizing themselves in his portrait of lavish apartments and boats.

But I doubt that his fawning followers will notice anything amiss. They will proudly embrace the titular promotion bestowed upon them by their Cheeto Jesus (even though as the writer above pointed out, very few of them actually enjoy the lavish lifestyle of "the elite" as defined by Trump at his recent rallies). And they will continue to proudly sport their red #MAGA caps, chanting "Lock her up!" and "Build that wall!" while their savior smirks, hugs the American flag, and brags about his big crowds and the Big Win in 2016. The less logical sense he makes, the more they cheer him.

[Addendum 30 August 2018:] Like many A-list Scamworld gurus (e.g., Kevin Trudeau in his glory daze, according to reports I've heard from people who know him), Trump seems to harbor a thinly-disguised contempt for his fawning followers, at least those who aren't as "wealthy" and "successful" as he. As the author of the linked NY Magazine piece writes, "Conservatives have spent decades depicting liberals as coastal snobs...But as is so often the case, the accusation that was made falsely against Democrats turns out to be true of Trump. For all his vaunted populism, he is filled with contempt for average people in general and his own supporters in particular." Trump, the writer observes, has built his brand on attracting the working class, but the admiration is unilateral; Trump wants to be envied and admired, but he views his admirers as suckers.]

So what does all of this have to do with the Scamworld that is the foundation of my original beat? I'll get to that in the next post. It's been a long day.


* * * * *
Now more than ever, your donation is needed
to help keep this Whirled spinning.
Click here to donate via PayPal or debit/credit card.
If that link doesn't work, send PayPal payment directly to
scrivener66@hotmail.com
or to cosmic.connie@juno.com
If PayPal, be sure to specify that your contribution is a gift. Thank you!
Posted by Cosmic Connie at 8:21 PM No comments: Links to this post

I thought I saw him walkin' up over the hill...


Bobby Kennedy died at 1:44 AM, fifty years ago today.

On April 4 I was preoccupied with personal turmoil and failed to properly acknowledge the 50th of the assassination of Dr. Martin Luther King Jr., so consider it so acknowledged now.

It might be tempting to boast about how much progress we've made in half a century, but looking around today, it's pretty clear that we haven't. America was being ripped apart then, and thanks to the toxic polarizing effect of the orange Oaf of Office, the country often seems on the verge of a civil war now.

I'll be back to skewering scammers asap, but just wanted to take a moment.

Marginally related on this Whirled: On arrogance, atonement, and ambivalence (11 September 2009)


* * * * *
Now more than ever, your donation is needed
to help keep this Whirled spinning.
Click here to donate via PayPal or debit/credit card.
If that link doesn't work, send PayPal payment directly to
scrivener66@hotmail.com
or to cosmic.connie@juno.com
If PayPal, be sure to specify that your contribution is a gift. Thank you!
Posted by Cosmic Connie at 1:35 PM No comments: Links to this post