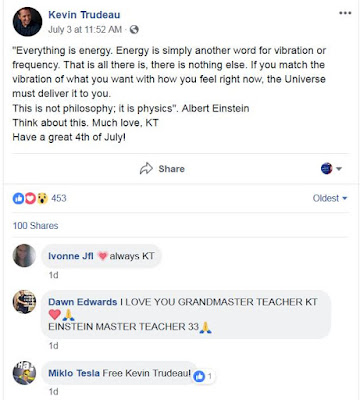 Back in the glory daze of the 2006 New-Wage moviemercial The Secret, which dragged the decades-old New-Age concept of "creating your own reality" to new pseudo-scientific depths, the late Nobel Prize-winning physicist Albert Einstein was paraded across the Internet in ways that most likely would have appalled him. He was repeatedly cited by "Law of Attraction" (LOA) hucksters as having scientifically validated their portrayal of "The Universe" as a mail-order catalogue or magickal genie, just waiting to grant all of our wishes if we only followed the advice of, and dropped our hard-earned money into the pockets of, any number of New-Wage con artists.

While all of this provided tons of blog fodder here and elsewhere on the Net and other media for years, you'd think it would all be old news by now, and only marginally relevant, particularly in light of all of the other crap that "The Universe" (or at least the White House) keeps flinging at us. Yet there is one person with too much time (in more than one sense) on his hands, and clearly too little money, who is still trying to exploit poor old Alfred and LOA. I refer, as I often have here, to imprisoned serial scammer Kevin Trudeau, aka KT, aka Katie. And Mama Mia, here I go again, plucking some very low-hanging fruit to share with you (I am still, after all these years, a lazy blogger, and I often go for obvious targets, even though it continues to surprise me that these targets are not at all obvious to many). Recently, like just the other day, I've blogged about Katie's attempts to get a pardon and release from Donald Trump.

On July 3, the same day I published my most recent Katie post, Katie was doing some posting of his own. He published, or caused to have published, this fake Einstein quotation on his Facebook page.


"Everything is energy. Energy is simply another word for vibration or frequency. That is all there is, there is nothing else. If you match the vibration of what you want with how you feel right now, the Universe must deliver it to you.
This is not philosophy; it is physics". Albert Einstein
Think about this. Much love, KT
Have a great 4th of July!

And the fans of flimflam fawned as they always do, not even questioning the authenticity of the Einstein quotation.

But the real fake quotation is a little bit different, though in essence it conveys the same specious message.


Everything is energy and that’s all there is to it. Match the frequency of the reality you want and you cannot help but get that reality. It can be no other way. This is not philosophy. This is physics.

Unfortunately for true believers, there is absolutely no evidence that Einstein ever said this. Which will probably not come as much of a surprise to many of you.

Not that this will matter to Katie's fans, or to anyone else who, driven either by desperate longing or New-Wage crapitalism or a combination thereof, will continue to misquote and misappropriate greater minds and lofty concepts in any way that serves them. And certainly Kevin Trudeau has been crapitalizing for years on the whole "Law of Attraction" thing, pushing its articles of faith, which are based not only in faux quantum physics but also in a century and a half of "positive thinking." His 14-CD set, Your Wish Is Your Command, which was really little more than a come-on for his mega-scam GIN, is a case in point. The more things change...


* * * * *
Now more than ever, your donation is needed
to help keep this Whirled spinning.
Click here to donate via PayPal or debit/credit card.
If that link doesn't work, send PayPal payment directly to
scrivener66@hotmail.com
or to cosmic.connie@juno.com
If PayPal, be sure to specify that your contribution is a gift. Thank you!
Posted by Cosmic Connie at 12:22 PM

Labels: Kevin Trudeau, Law Of Attraction, The Secret, Your Wish Is Your Command

Hey Connie, just want to say I have really enjoyed your blog for quite some time and it has opened my eyes to a lot of these scammers. I hate to admit it but I was yet another person that was suckered in by The Secret, Joe Vitale, and KT especially!

In fact, after looking into Katie's background I honestly can't believe I ever fell for such a charlatan. Actually, I think he is worse than that. He has all the signs of a true narcissist and a pathological liar. If you haven't heard this one, you may find this particular whopper of Katie's rather humorous....on one of KT's Fakebook posts, he claimed that he was invited to a meeting (one of those super secret meetings with POWERFUL people of course!) right before Trump decided to run and was told that Trump would be made president. Yeah...problem is KT was IN JAIL when he claimed that this oh-so-important meeting happened. Oops!

Even in jail, he cant stop telling whoppers and when I pointed this out....nothing but crickets from his adoring, brainwashed fans. But hey, I won't be too hard on them because I used to be one of them. I joined GIN for a few months and eagerly bought and listened to Your Wish is Your Command CD series, and although there were some good things in it, I just cannot listen to it now because I know for a fact that the recording did not take place in his YUUUUUUUGE mountain chalet in Switzerland with rich, famous, powerful people (which he claimed) but in fact, KT recorded it in the studio. When I realized that, I thought, wow.....just wow! How much of a nut job do you have to be to pretend that you are talking to royalty (which he did!) when really you are just sitting in a recording booth??? And how much of a dummy was I for believing it?!

Anyway, I just want to thank you for writing this blog. I think it's important because there are far too many scam artists out there taking advantage of others. Someone needs to call them out on it. We all want more money of course and a nicer life, but after years of wasting time chasing too lofty dreams and having too much false hope, I think the real key to happiness is to simply find joy in all that you do already have instead of greedily chasing money like these guys, which still never fills the hole inside I've noticed.

Look at Joe Vitale; has over a DOZEN flashy cars costing 6 figures each, a big house, and STILL all he can think about is making more money to get more things in the vain hope it will one day erase his insecurity. He has WAY more than he could ever possibly need and could easily give the rest of the money he makes to charity the rest of his life, but instead he hoards it like Scrooge. In a way, I think that is hell. If these guys weren't ripping so many people off, I would almost feel sorry for them.

Thanks again and keep the snark coming!

Thank you so much for your comment, Anon July 21. Katie is and always has been an expert manipulator, and lots of intelligent and educated folks fell for his various shticks. And yes, he is still running scams from prison camp. I don't believe I recall seeing a FB post where Katie claimed that he was invited to a meeting right before Trump decided to run for president, but I do recall him boasting about having accurately predicted Trump being made nominee. But the "meeting" he referred to in that post was a gathering of him and his fellow prisoners, who included formerly powerful CEOs, billionaires, judges, and other elite types. He said they all laughed at his predictions about Trump back then, but that he turned out to be right about everything. This Whirled post is from July 2016, a few months before the election:
http://cosmicconnie.blogspot.com/2016/07/trumpdeau-redux-kevin-trudeau-is.html

As for Joe Vitale, you are spot-on: he betrays his insecurity with nearly every tweet and blog post and video.

Thanks again for reading this blog and taking the time to write. I miss the conversations here!