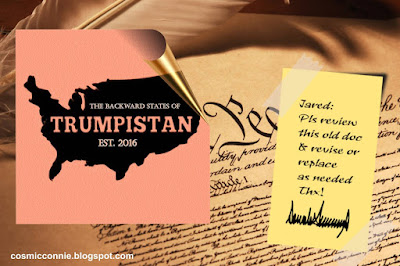 A new national anthem has been proposed for the Divided States of America. This one is far easier to sing than "The Star-Mangled Banner" -- so easy that even the Oaf of Office can probably learn it. At least it'll be easier to hum along to, since it's the same tune as "America the Beautiful." Not so many tricky high notes. He can hum along while he's (allegedly) mis-coloring the American flag. So put on your red cap and your brown shirt, open your mouth, and sing out. Don't forget to keep that right arm fully outstretched in a perfect salute throughout the anthem. #MAGA, baby!

Trumpistan the Beautiful
by Cosmic Connie

O beautiful for specious words
At rallies and in tweets,
And for our Orange King’s vows to crush
The mobs out in the streets
O Trumpistan! O Trumpistan!
We’ve finally heard God’s call
Restore the good white brotherhood
And build that splendid Wall!

O beautiful for courage to
Enact the Muslim bans,
And for his pledge to save us from
The migrant caravans
O Trumpistan! O Trumpistan!
Your borders shall be sealed
And all Amendments we don't like
Effectively repealed.

O beautiful for glorious guns
And high-cap magazines;
And for our right to arm ourselves,
Our toddlers, and our teens
O Trumpistan! O Trumpistan!
We'll fight each "safety" law
And when mass shootings happen, we
Will just blame "Antifa."

O beautiful for legislators
Kneeling to their King
Who more than country love their jobs,
And to his robe do cling
O Trumpistan! O Trumpistan!
Whose King inspires such awe:
He has no soul, no self control,
He lives above the law.

O beautiful for High Court rulings
Favoring the King
And for a hand-picked Justice boss
Who lives to kiss his ring
O Trumpistan! O Trumpistan!
All hail the Orange Crowned Head
We won't need three whole branches when
Democracy is dead.

O beautiful for playing down
That irksome new disease
For blaming Dems and media
And all those damned Chinese.
O Trumpistan! O Trumpistan!
Let's stop this nonsense now
So what if loads of old folks croak?
At least we’ll save the Dow!

[Note: a few links and lyrics have been revised
since original publication,
and as the atrocities continue I can't guarantee that there
won't be additional verses or other revisions.]


PS ~ Please, if you're a US citizen and are eligible and registered, get out and vote in all of your local races as well as federal elections. If you're not registered, make it a priority. You can check your eligibility and get instructions for registering here. Given the volatile political environment and all of the irregularities, voter suppression, and attempted interference in our democratic process by hostile parties (both foreign and domestic), it's logical to wonder if your vote will really be counted... but I always try my best, and I think you should too. I am still hopeful, or perhaps naive, enough to believe that it isn't too late to save our country from actually becoming Trumpistan. (Or Trumpica, if you prefer a variation that is not based on a Persian word... and, given Trump's hatred for any Middle Easterners who are not his business partners or political allies, maybe Trumpica would be more appropriate. So feel free to substitute. Trumplandia could work too, if you delete the "O" from the refrain.)


* * * * *
Now more than ever, your donation is needed
to help keep this Whirled spinning.
Click here to donate via PayPal or debit/credit card.
If that link doesn't work, send PayPal payment directly to
scrivener66@hotmail.com
or to cosmic.connie@juno.com
If PayPal, be sure to specify that your contribution is a gift. Thank you!
Posted by Cosmic Connie at 2:56 PM

I would love to ask his most ardent supporters if they would hire a cashier for their small business, or a babysitter to watch their children, who had such an extreme penchant for lying. If they say they would, they are either lying themselves or too stupid to be entrusted with even the most basic adult responsibilities, much less with determining the governance of the country.

Agreed, but you might not get anywhere with those ardent supporters, because they refuse to even acknowledge that he lies. At worst, some will say he exaggerates for effect at times, but they don't think it matters, since in their eyes he is keeping his promises, or trying to.

I am not optimistic that the political situation in the US will change in the foreseeable future. It wouldn't surprise me that the Democratic Party gets more votes but not in the parts of the country where they could make a difference. As someone who is not an American and lives outside the US, I fear for the future of a once great country.
H. L. Mencken accurately summed up the current US political situation in three quotes

"Democracy is a pathetic belief in the collective wisdom of individual ignorance."

"On some great and glorious day the plain folks of the land will reach their heart's desire at last, and the White House will be adorned by a downright moron."

"No one in this world, so far as I know ...has ever lost money by underestimating the intelligence of the great masses of the plain people."

Thank you, Anon. My optimism is eroding too, but I have not entirely given up hope. I just can't.