Hello from the hoosegow! Wish you were here (instead of me)! 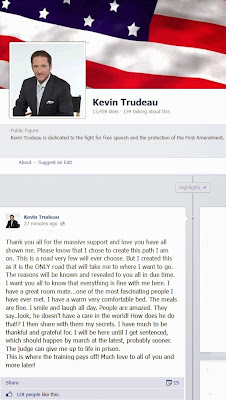 There's nothing like putting a positive spin on things. A cheery dispatch appeared on serial scammer Kevin Trudeau's "official" Facebook page a little after noon, Central Time today (Tuesday, November 19, 2013). Trudeau, as you probably know, is being held in custody, pending sentencing for his criminal contempt conviction.

Here's the permalink of Katie's cheerful message, for those who can get to it.

And up there is the screen shot, for those who can't, or who just don't feel like Facebooking right now. Click to enlarge, of course.*

Thanks to my ever-vigilant friend Omri Shabat of the Glancingweb blog for finding this.

Ya know, Katie sure spent a lot of money on lawyers to "create" this path that will take him to where he wants to go. Why didn't he just eliminate the middle man and hop on into that cell when they first wanted to throw him there? Why did he beg the judge for mercy on numerous occasions? Why, when given a brief reprieve in order to travel to the Washington D.C. area in October for a legal fundraiser, did he tell the media, "Obviously, I'm glad not to be in jail?"

But the responses to the Facebook post show he still has his passionate fans and followers (who will not question the disconnect between today's statements and previous behavior). They also show that he's earning more martyr creds, as I have been predicting for... well, for years. He is truly the First Amendment Stuporhero, as someone wrote back in August 2011. He is becoming more and more Nelson Mandela-like... why, perhaps even Christ-like!... in the eyes of some of those followers.

And I can just imagine him (and/or the minions) planning a whole new line of scams -- maybe targeted to the caged population (which, as my pal Mike pointed out, is growing, particularly in the United States). It's a whole new untapped market! Forget the New-Wagers; here come the New-Cagers. Viva Las Cages! (We do know that he has already promised to write the book to end all books re government tyranny, in the event of his imprisonment. He mentioned it again in a video just this past June, as noted on this blog post.)

True-dough's minion has written a few more posts since the one I shared above. It's all along the same theme: all is well, I am having the most amazing experience, all will be revealed in the fullness of time, blah blah blah. And the "likes" and loving responses are flooding in (it's also surprising how many of the fans seem to have no clue of the whole incarceration thing). Here are some responses from a later post. Note the woman who says she has shrines to the great Katie -- something that's not as unusual as it might sound to some of you, given the deep seated human desire to worship: 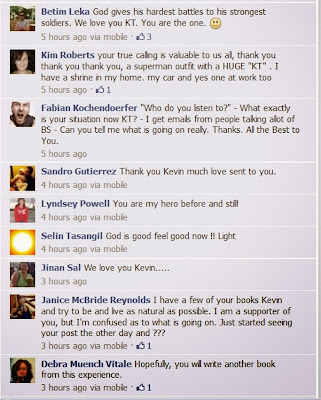 At any rate, I so wanted to comment on that "official" Kevin Trudeau Facebook page, so I "liked" it, but gosh, for some reason I am blocked from commenting. Just like I'm blocked from commenting on (though not from seeing) the IBMS Master's Society official Facebook page, run by two ex-cronies of Katie, Mocktor Loony Lenny Coldwell and Peter Wink, who were probably responsible for more GIN scamming between them than just about any other person except Katie and a select few other cronies.

I guess there are some people who just do not want to hear from Cosmic Connie. Maybe I'll send Katie a postcard. As for the IMBS-ing U folks, they have free access to my Whirled so they don't need no stinkin' postcard. Hugs, ya'll!

PS ~ Just to put things in perspective: I still, despite my snarking, do not believe Trudeau belongs in a cage, and despite his own positive spin, you know and I know that Federal prisons are no Club Fed. Those days are gone. Thanks again to my pal Mike for pointing out this article, which drives that reality home. Also keep in mind that Trudeau has not been officially sentenced yet, and depending upon what happens with the post-trial motions, he isn't necessarily in a cage for the long haul.

* I should clarify that unless he has special privileges (which is very unlikely), I do not believe Trudeau is writing these hokey Facebook updates himself, any more than convicted killer and star of The Secret James Arthur Ray was writing his own promotional crap when he was behind bars (among other things, as reported here, Ray had his people send out emails pushing Your Wish Is Your Command and GIN). But somebody is clearly doing it on Katie's behalf, with or without his blessings. And the posts that are now appearing on that Facebook page are very much congruent with his practice (and for that matter most feel-good gurus' and cult leaders' practice) of pretending that "all is well." Of course the gurus could never pull it off without an army of enablers. In any case, for reasons both financial and emotional, it behooves Trudeau and his remaining supporters to put a positive spin on things in order to keep "the legend" alive. (And do not underestimate the potential payoff; keep in mind that entire religions have been started on far less.)


* * * * *
Now more than ever, your donation is needed
to help keep this Whirled spinning.
Click here to donate via PayPal or debit/credit card.
If that link doesn't work, send PayPal payment directly to
scrivener66@hotmail.com
or to cosmic.connie@juno.com
If PayPal, be sure to specify that your contribution is a gift. Thank you!
Posted by Cosmic Connie at 11:59 AM

And for the benefit of those of you who are not following the jailhouse drek on Facebook, here is the comment du jour on Sunday, December 1:

"Don’t feel sad for me. I am far from sad. I am so happy, more than ever! The reason I am so happy is I knew long ago that this would probably be coming for me. I chose it. I accepted it. I was preparing for it. I was welcoming and embracing it. I was looking at it as an adventure, a challenge, and an experience that would make me a better person and release abilities that I would have never been able to release unless I experienced this situation. All great people in history have gone through tragedy and/or devastating times in their lives. Many went to prison. In the Bible, Joseph was thrown in prison for over 7 years. Read the Book of Job in the Bible...think about Mandela, Gandhi, Chavez, even people like Steven Jobs. Great people who do great things have all had major tragedy. Health issues, bankruptcy, losing all material possessions, family problems, having their businesses taken away, being put in prison etc.. Think about and read the stories of Onassis, Pat Robertson, Walt Disney, Colonel Sanders, Ray Crock etc. The list goes on. This road is not for everyone and most people should NOT chose this road. But you all will benefit from the road I have taken...Much love to you all."

A little ditty I wrote shortly after the hoosegow hellos began...

Jailhouse Crock
[To the tune of Elvis Presley's "Jailhouse Rock"]

Kevin throws a party from the MCC
Tellin' all his followers, "Don't weep for me!"
Facebook is jumpin' even though he's in the clink.
Still tellin' all his fans just how to think.
But it's a crock, everybody, it's a crock.
Just a flimflammer's same old schlock
Don't listen to his jailhouse crock.

Messages are comin' in from sweet Janine,
Katie's playin' Christ and she's his Magdalene.
The scammer boy of Illinois says, "All is well!"
Doesn't want the fans to know it's really hell.
It's a crock, everybody, it's a crock.
Just a con artist's same old schlock
Don't listen to his jailhouse crock.

Kevin's sayin' life in jail's a piece of cake
Tellin' folks, "Stone walls do not a prison make."
Says he's at a place where he has never been
Says he's really tickled to be in the pen.
But it's a crock, everybody, it's a crock.
Just a swindler's same old schlock
Don't listen to his jailhouse crock.

Kevin says he's breakin' through a "wall of fire"
Says that being caged will only take him higher
Says he chose this "path" and that it's all a gift,
He's layin' out the groundwork for another grift.
It's a crock, everybody, it's a crock.
Just a charlatan's same old schlock
Don't listen to his jailhouse crock.

Kevin's hidin' money on a distant shore
Thinks he's gonna get it when he's caged no more.
Bet against the Feds but he may lose this round
At least he's gonna get to keep his martyr's crown.
It's a crock, everybody, it's a crock.
Just a serial scammer's same old schlock
Don't listen to his jailhouse crock.