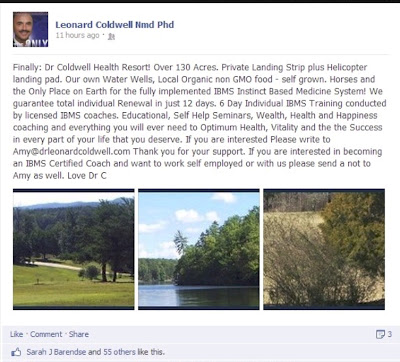 Dear Ones, I have wonderful news from the Palmetto State (that would be South Carolina): Mocktor Leonard "Loony" Coldwell, the former Bernd Klein, aka Bernd Witchner, may now have a new venue from which to peddle his pricey IBMS schemes, train his militia, and practice his hands-on healing. Yep, according to Loony, he has just procured 130-plus acres in South Carolina, near the Georgia border and one hour away from the Atlanta airport (see screen shot above and the two below). The property is slated to become the long-awaited IBMS Health Resort.

We are working on Town-rights and will have our own elected Sheriff etc. The first step towards liberty and freedom. And NO restrictions on what kind of treatment we apply here! 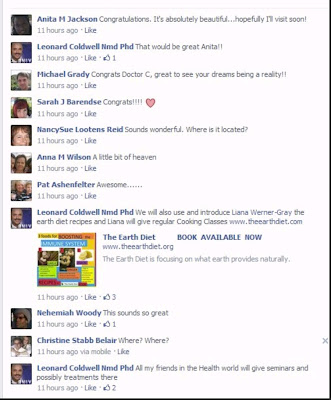 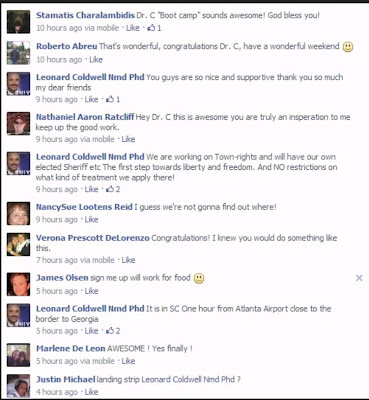 Loony's young protege Abe Husein is excited about it too. 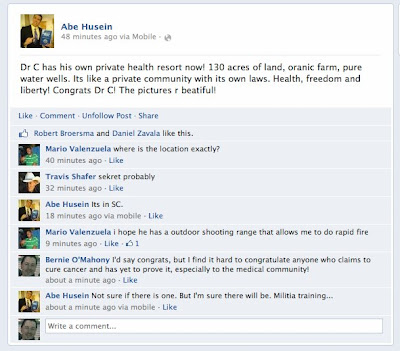 But before anyone else gets too excited one way or the other, perhaps a little perspective is in order. Leonard Coldwell has always been a little man with big dreams. Even a superficial online search of trademark info reveals that he has a string of failed/abandoned business ventures, both in Germany and the U.S. (And yes, I know I have mentioned this before more than once, but it seems fitting to mention it again.) Follow the link in the sentence above and you'll see several enterprises that ended up going nowhere. On most of these listings there are also links to the actual information on the United States Patent and Trademark Office web site.

In any event, this latest development should come as no big surprise; after all, Coldwell claims to have had a chain of "clinics" in Germany years ago, and for years he has also talked of opening up a complementary-med health resort. Here's one of many sites in which the resort dream is mentioned.

In 2000, Dr. Coldwell made the decision to invest his time, knowledge and experience in teaching and consulting to help make a better world for children and parents. Through his children's foundation, he is helping teachers, parents and children deal with stress and drugs in the local schools. Further, he is well into the planning stages for the world's largest most comprehensive health resort. His plan is to house every mainstream, alternative, holistic and integrated therapy system in one location so that patients will have access to state of the art healing arts and practices in a wellness setting unique to the world.

That "children's foundation" referred to is Coldwell's Foundation for Crime and Drug Free Schools and Health for Children. It seems to be yet another defunct organization, and virtually the only mention of it that can be found online is in Loony's standard biography where he boasts about all of his miracle curing and his humanitarian accomplishments.

But still. Could it be that despite the naysayers, Loony C is finally on his way to realizing his fine dream of opening up the most comprehensive health resort ever? Meh... anyone can post pics of real estate and talk about their big dreams, But even if he did actually buy this property here are a few things to keep in mind, for those who may want to research this matter further:
1. It will almost certainly not be in his name. People who know him very well have told me that he never wants his name on any property transactions. That is most likely a privacy and tax-avoidance strategy. No doubt that is why he has that phony church (The Church of Inner Healing, registered in Nevada), that phony university (Wellness University LLC, registered in his wife's name), and who knows what else. He has also reportedly funneled a great deal of money through German friends who have set up bank accounts here and in Germany. (Meanwhile he crows about Kevin's "money laundry.") He may have even set up a whole separate company for this property transaction, if indeed there has been a transaction. 2. Even if he sets up "Town-rights" and appoints a sheriff and declares the property "sovereign," it is still in the US and subject to US law. And if he gets reported for performing illegal "treatments" or hosting events where such "treatments" are performed -- or does anything else illegal or questionable -- he could end up with a swarm of Feds storming the compound. Worst case: It could actually result in a shoot-out, making Lenny the ultimate hero/martyr in the eyes of people who are still idiotic enough to worship him. The sad thing would be that innocents could be hurt or killed too. 3. Regarding the IBMS training (not to be confused with Lenny and Peter Wink's IBMS Master's Society scam): I've heard from a few people who have gone through that training that it's overpriced and repetitious, and people are disappointed to learn that despite the big promises, they really can't make a living being an IBMS coach or practitioner. Apparently there is a very small number of licensed professionals -- maybe a chiro or two -- who integrate IBMS with their regular practice, but the only one who is really making money off this scam is Loony C himself. Perhaps he is pushing it again now because he needs money for a down payment on his South Carolina utopia.

A friend of mine said that the prospect of an IBMS resort kind of reminded him of the late cereal magnate John W. Kellogg and his Battle Creek Sanitarium at the dawn of the 20th century (the novel and film The Road To Wellville were based on this). Another pal noted, "It just looks and sounds like the opening scene in a horror movie. "Where have the missing girls at Coldwell Health Resort gone... eeep eeep eeep..."

But I suspect we should hold off on our "eeeps" for now. I wouldn't hold my breath waiting for the Loony C Health Resort to open any time soon.

Update, 29 April 2013:
Despite us naysayers and "hatters" (as Lenny's boy Abe likes to call us), the dream will not die! If you are looking for a job that will exploit your skills and labor in the service of building Lenny's dream for Lenny and maybe a few of his friends, look no further. 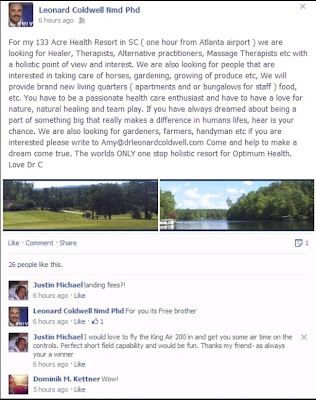 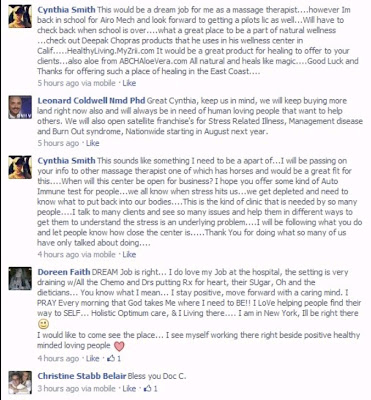 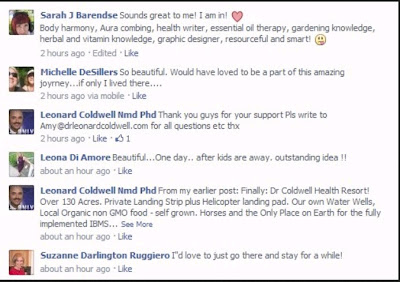 So apparently the "healers" all have be alternative/holistic practitioners. So much for Lenny's original vision to include open-minded real doctors too -- but then again, he has never had a good working relationship with anyone in the real-doctoring biz. Right now his Screwtopia is shaping up to be just another New-Wage community/"healing center" -- only with militia potential, given Coldwell's obsession with guns and overthrowing the tyrannical gummit. But there will probably be plenty of love and light to go with all of those guns. After all, we have a New-Wage dilettante and fierce Lenny defender who knows how to do "aura combing" (I wonder if she does braiding too), so it prolly won't be all firearm fanaticism.

In any case, as a friend of mine pointed out, Lenny's idea isn't all that new or original. My friend wrote, "Really funny how he says it's the world's only one stop holistic resort. He hasn't even broken ground on it, and it's not an original idea. The Raj, The Chopra Center, and Alive Resort in B.C. come to mind." Amen. So-called 'holistic' resorts have been around for years.

As for those "new apartments and bungalows" for staff, my first thought upon reading that was, "Wow. Just like in Scientology compounds (and every other cult for that matter). The fearless leader and a few favorites live large. Everyone else, not so much.

One thing that popped into my mind was Scientology's Sea Org and the other elite divisions of the Church of Scientology. I have read enough of the book, Beyond Belief, by Jenna Miscavige Hill, the niece of the current Scientology head, that Coldwell's call for warm bodies to build his community made me raise my eyebrows. Scientology works its Sea Org people and other "special" members -- even the very young kids -- like slaves, and most live in pretty scruffy quarters. Only a few top dogs get the cushy quarters and all of the amenities.

Of course Lenny isn't nearly as smart as Elron Hubbard or even the current Scientology leaders -- or most other cult leaders, for that matter. But he still seems to have ambitions in those directions. And what's sad is that a few idiots and misguided souls may actually join him. It's truly a creepy prospect. All I can say, with all due apologies to Willie Nelson, is: "Parents, don't let your babies grow up to be Lennites..."


* * * * *
Now more than ever, your donation is needed
to help keep this Whirled spinning.
Click here to donate via PayPal or debit/credit card.
If that link doesn't work, send PayPal payment directly to
scrivener66@hotmail.com
or to cosmic.connie@juno.com
If PayPal, be sure to specify that your contribution is a gift. Thank you!
Posted by Cosmic Connie at 5:34 PM

Doesn't sound like hell to me,cytotoxic therapy radiation and surgery do though.

Can anyone say Jonestown II, minus the suicides replaced with a law enforcement raid?

Nah most likely he's a smart con artist not someone looking to be a martyr.

Anon, certainly cancer treatments can be hell too. No denying that. But a "health" farm run by a fraud/flake/predator -- who has NEVER been able to substantiate his cancer "cure" rate -- does not sound like my idea of Utopia.

Mac, I would say "con artist" applies, but smart... maybe not so much, LOL.

Another angle to consider is that this is all Lenny make believe. Why would he make up this elaborate lie and tell his pals these things? Just look at the reactions, they are all lining up to kiss his ass for the opportunity to work there. This might buy him another year of loyalty from some of these people, at least pretend loyalty and lots of ass kissing. Not many of these unemployable idiots would risk losing a great job opportunity like this over some crazy need to be honest or moral about the things Lenny says (and does)

The most pathetic of course is Sarah who posted her entire resume of fake woo woo skills and knew that she needed to add landscaping just in case her aura braiding, light weaving skills were not in high demand in Lennysworld.