The martyrdom of Saint David 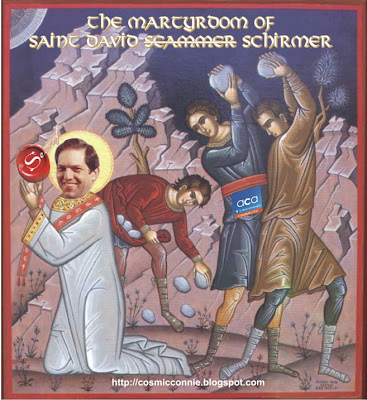 I was going to sit down and write a thoughtful post to follow up on the David Schirmer / Secret topics I wrote about the other day. But I'm a bit of a hurry right now because I want to go out and enjoy this lovely Memorial Day holiday with The Rev. So I'll just take the lazy way out for now.


It looks as if Schirmer, the lone Aussie talking-head on The Secret, really was "set up" by the Australian show A Current Affair. I have, however, modified my opinion that this was a shameful thing on their part.

Take a look at the video of the segment and see for yourself. (Note: This link only seems to work if you're using Internet Explorer as your browser; if you are using Mozilla Firefox, you will be asked to download a plug-in to view the video.)

Schirmer is now in full martyr mode, and he posted a message to his supporters on the thread he started on the Powerful Intentions forum, where he went to boast before the fact, and then to whine after the fact, about his ACA interview. Essentially he said that he is only going to comment once regarding the recent negative media, and will not respond to any further "slanderous claims or defamatory comments."

...As for the people who spoke on there, the truth always wins. All accusations will be dealt with thoroughly and in the proper legal and commercial manner. I'm not angry at them as they have their view and perspective on events, (n)or will I attempt to defend any comments made by others on TV or here ... it would be a waste of everybody’s time and effort and ultimately turn into "he said, she said, I said" rot. The truth will always be the truth even if only one or two people know it. Whatever you focus your energy on you draw toward you, and I choose to focus my energy on the thousands who I help and work with, the teenagers who go through Youth Destiny Camp and are transformed for life, the drug addicts that set free from life threatening addiction, the couples whose relations grow and flourish, the people who hear our story and see a new hope and the thousands of students who have attend our stock market programs and Mind & Money event are now making more money then they ever thought possible. When you understand true abundance you can not harbour revenge, resentment, anger, jealously, spite, envy, or covert what someone else has. All those things are the fear of loss of something ... and if there is true abundance how can one fear loss.

...Being on The Secret was always going to be a risk ... every concept that challenges a persons way of thinking has its attackers ... history shows they continue until accepted by the majority; people were stoned to death for saying the world was round! There was a reason I was chosen to be on The Secret, thousands of others could have been, yet they weren't ... think about it, maybe it has something to do with the life I have lived, the results I have achieved and the standing I have with my peers here and around the world...

Notice the diversionary tactic of reciting some of his good works, as well as that much-used declaration about new ideas being a threat to the unenlightened masses.

This, Dear Ones, is modern martyrdom at its finest.

PS - I'll have more a little later – including more about Vanessa Bonnette, whom I also mentioned in my May 25 post. Vanessa says Rhonda Byrne plagiarized some of her writings, and I think she has a point.
PPS - My thanks to Scott Pape, aka The Barefoot Investor, for keeping me abreast of the Schirmer matter. Scott, as you may recall, wrote a fine article on Schirmer and The Secret last week.
PPPS - My thanks also to Blair Warren, who just sent me this link to a video of the unrepentant Saint David's rebuttal to the "negative press." "Notice how he can't seem to resist turning it into a sales pitch at the end," Blair wrote. "Amazing." Notice, too, how Schirmer invokes the name of another Secret saint, Bob Proctor, whom he says is his mentor. Funny thing, I just heard a tale of someone who claims he got screwed out of thousands by Proctor... but that's not my story to tell.
Posted by Cosmic Connie at 11:23 AM

My computer is mysteriously keeping me from reading anything that you post about David Schirmer. (Damn the dark energy) The Powerful Intention guys are deleting any and all honest opinions, on the thread you posted, about this Teacher from down under who seems to be standing on a pile of ill gotten loot. If I had not read some of the post yesterday I would say that there are a lot of people saying nothing but XXXXXXX on that thread today.

So I guess the Powerful Intention is founded on the same freedom of speech theory that powered the Russian empire during the “cold war”. But wait there’s more, the video you posted a link to has seemed also to be sucked up into the dark energy field also. The best I can figure is that the LODE is protecting the LOA.

I may have to step up my plans to create a new law and exploit any remaining PR that the secret can muster. It appears that I was wrong and the secretons where correct, what they sent out is in fact coming back to them. David Schirmer is the proof, he seems to be attracting a lot of “it” to himself lately.

You just may be on to something, WB, re the LODE/LOA. However, there's probably a less mystical (or less scientystical) explanation. On page 3 of the Secret/PI thread, one of the co-founders of the Secret/PI forum implied that he really wanted to delete the entire thread but doesn't have the ability to do so. That thread is not long for this world, but not to worry; I've been copying and pasting into a Word doc, and the thread just might find its way here.

As for that video that disappeared, I imagine David Schirmer removed it himself. Either his attorneys told him to take it down, or he just realized he was digging himself deeper into his hole and making himself look even more like a sleazy hustledork. Anyway, stick around for more "scandal-mongering" here! :-)

Shucks that took all the fun out of it!

Maybe if I read what you wrote backwards I can forget that I read it and go back to believing the dark force energy is responsible for these unexplained electronical events. Sort of like deleting opinions on a thread?

I imagine Dave Shirmer wishes he could delete the ACA segment of his success story as well.

I will be standing by for more of your riveting reporting on what appears to be some of the more entertaining developments in the self development arena.

Thanks for the grins.

Thanks, WB. More will be coming soon...

You can find extracts from the deleted/censored thread and my commentary on the Martyrdom of Saint David here:

Anyone who spends five minutes with David would know that the TV show was nothing but an elaborate set-up. David is a good man.

You did the same as A CURRENT AFFAIR did. You printed lies about David without even meeting him or asking him his side of the story.

You trashed everyone he met with along his path.

Um...not necessarily, Anon (or should I call you Mr. Schirmer?). Truth is, I *can* do a few things and I even possess some marketable skills. However, my skills do not include mishandling other people's money and otherwise deceiving them, as Schirmer has been accused of doing.

And Schirmer *has* been asked, on numerous occasions, to tell his side of the story. So far, the best he can come up with is to say that he has been falsely accused and that most of it is the fault of a spurned lover who is leading a vendetta against him. Sorry, but at this point I'm not buying that story.